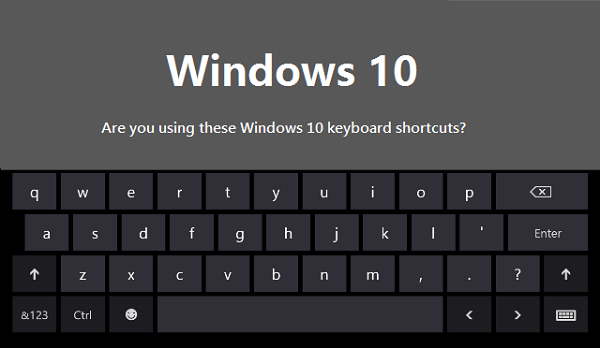 Many of the shortcuts already learned in previous Microsoft operating systems still worked so let’s focus on some of the new features of the system, such as virtual desktops, the assistant Cortana terminal or command. Although not a keyboard shortcut also discuss the call that lets you have on hand any matter relating to computer settings “God Mode”.

Let’s start with one of its new features, such as virtual desktops, which allow you to have different desktops which can run applications in different fields. Very useful for example if you use Remote Desktop to access another machine or are of those who work with multiple windows.

If we wish to move applications from one desktop to another we accede to the task view and simply drag the open application to the desired desktop.

If we do not like virtual desktops but we work with several windows at once have the option to move windows to side to side of the screen to order them. Windows 10 allows us to take full advantage of the large screens.

When we couple a window occupying an area of the screen Windows offers us others that have open to fill the gaps free. This way we can maximize productivity we can get a big screen.

The command console is another option we have to work and we can be very useful.We can use keyboard shortcuts, even if it means we must first enable it in the window through the properties and uncheck the option to use the legacy console. Then we have to make sure we have checked the option to enable shortcuts Ctrl key. We have the following options:

Cortana and keyboard shortcut for Windows 10

Microsoft’s new assistant can be very useful to move within the operating system. In this case, we have different options open depending on whether we want to give voice commands or keyboard. Let’s see some of them:

Cortana also serves to create reminders quickly for appointments that have not happened to us. An assistant that can benefit substantially both from the desktop and from a tablet or laptop.

Other shortcuts and tricks to be faster with Windows 10

There are some shortcuts and tricks that help us move to the new operating system faster to finish. Come up with some examples:

Another configuration option that can be very useful is to have direct access to the”God mode”, a folder with all the settings of the new operating system. To do this we need to create a new folder on your desktop and rename it: “.. GodMode {ED7BA470-8E54-465E-825C-99712043E01C}” and see how the folder icon changes to one similar to the control panel.