Memories of the ZX Spectrum 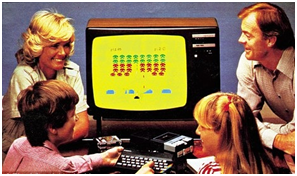 In 1983 there was only one thing on my Christmas list. A ZX Spectrum. I sold the idea to my parents that I “won’t just play games on it! I can use it for education…” knowing this was a downright lie and the Chequered flag, part of free 6 pack of games, was going straight on there along with Horace Goes Skiing. Christmas day duly arrived and there in all its dubious glory was the rubber keyed “Speccy” ready for my use and entertainment. I swore I’d read the manual and program on it, but I gave up and it just became a games machine as I knew it always would. 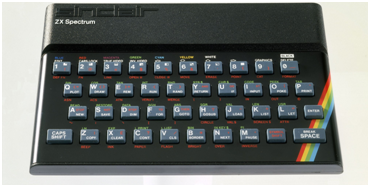 The thing with the Spectrum was that it needed a certain degree of imagination to play the games on it. For example, Chequered Flag saw you racing across a featureless plan that purported to be Monaco or Silverstone or the deadly Cambridge Ring (they made that one up obviously). It was also strictly a time trial thing. There wasn’t the programming power for more cars and essentially you guided round you square wheel “Mcfaster Special” until you became bored. This became a theme throughout my gaming life. The AI was pretty non-existent presenting you with either easy opponents that just followed a set path or ones that were too tough. The later levels on Match Day 2 saw you facing ESP goalkeepers for example obliging you to pretty much having to walk the ball into the goal.

Somehow though this meant that you had to use you own imagination to fill in the gaps. It was pretty innocent as a pastime and I spent many happy hours not doing my homework. The graphics were shockingly basic compared to now but at the time and looking back that does seems a little unfair on the programmers as they were working with a very limited amount of memory compared to the gargantuan amount available now. I suppose that we too were pioneers playing the games, feedback and always wanting more and more capacity which the programmers were only to willing to try and accommodate, for a price. Towards the end of it’s heyday the Spectrum began to produce incredible games that pushed the machine to it’s absolute limit. Outrun whilst not looking like the original in its vivid colour was at least faithful in it’s gameplay. The Spectrums limited sound helped by the fact that once you had loaded the game, via audio cassette, you could play the other side which featured the soundtrack from the arcade game.

It survived a water poured down the back of it, me hitting it in fits of rage as it denied me a victory, being dropped and the rubber keys print being worn off. By 1989 though it had had its day. Home computers had moved on to the Amiga (which I switched, to using the same reasons to my parents I had the first time about it being essential to my education) and the Atari ST. It was time to pack away the little warrior and for it to enjoy a retirement in the attic where it still resides today.

Graphics have come such a long way since the 80s, as this article from the BBC states http://www.bbc.co.uk/newsround/17525291 and now designers like EQ Media offer Kent web design services can create great masterpieces in web design.